Where it all began
(by Martin Cole, whose father was a founder Member) 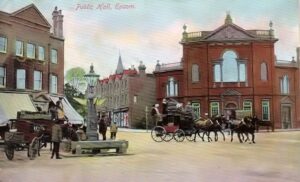 The Public Hall, Epsom
Image source: Bourne Hall Museum
This is where the roots of The Epsom Club were sown: the former Public Hall, established in 1883 on the corner of Church Street and Upper High Street (named Station Road in those days). The main door, surmounted by the inscription ‘Epsom Town Club’ led into the (men only) club premises on the ground floor, and with separate entrances for the upper hall floor (ladies admitted) which was hired out for events, functions, meetings and entertainments.

Let’s set the scene – 100 years ago, Epsom was a very small town, famous for its health-improving salts and hosting one of the world’s top horse races. As is still happening today, more and more people wished to live here. There was the occasional motor car to be seen, plenty of horses, carriages and carts and the building of the new coal and timber sidings on opposite sides of the original Epsom railway station – still partly visible in Upper High Street (or Station Road as it then was called).
In that environment, everyone knew everyone in the town. Interestingly, I still hold a business card of my late father on which is printed only ‘Harry Cole’ Epsom. He lived in Croydon and had been sent by Hall & Co brothers (who owned the huge coal and business sidings there) to run the new Epsom coal business which, being a vital resource, excused him from serving in WW1.
Being a sociable guy, he quickly became well known about town and was a member of The Epsom Town Club of its time. For whatever reason, he and a very few friends decided to form their own club, using other venues in town … until an opportunity was grabbed to rent a house in Church Street known as The Hollies from the Barnard family (of Barnard Stand fame, seen at the racecourse finish). Harry was later to become club secretary. Each member paid the significant sum of £1 – £68 in today’s values – for membership and received a share certificate. When the club was first registered there were 86 members. In 1914, one JB Maye was appointed the first secretary. Within 15 years the membership had doubled to 170.
The Hollies grew to become the favoured watering hole for all local businessmen. They engaged a live-in Steward who daily lit three coal fires in the downstairs lounges and one in the new snooker room upstairs, containing three tables. The garden was large enough for a full sized bowling green and horses were frequently tied up at the front with the occasional appearance of a car.
Finances, as in recent years, were always stretched and, in view of the small membership, the leaders regularly ‘topped up’ the accounts each year to balance the books. In his more reminiscent moments in his later years, Harry Cole recalled that, on many occasions, following a day’s works and then a few hours in The Hollies, he would get in his trap, say to his horse ‘home’ … and wake up outside his home in Croydon.
1936 was a momentous year in the club’s history. A local bank manager was in the club one evening and, after a few hours of social enjoyment, agreed to lend the club the then enormous sum of £3,300 (equating to £138,000 today), enabling the purchase of the freehold of The Hollies. There was no mention of repayment terms, only ‘as and when’! ‘When’ turned out to be 23 years later for the debt to be repaid.
For the first 50 years of its life The Club, or The Hollies as it was better known, was the second home of the town’s businessmen. The introduction of a ‘one armed bandit’ in the early sixties coincided with a huge -growth countrywide in social clubs and the slow, and occasionally, painful evolvement of female membership in a male preserve.
In 2003 a milestone vote was passed: women were allowed to join as full members. The first lady to join was the late Margaret de Lyon. In 2010 members approved the appointment of our first female secretary, Mary Dixson … still in situ. Today we have 279 full members, the oldest is 94 and the youngest 24, 40 of whom are female.
In 1986 a new bar and kitchen was constructed at a cost of £70,000 – the one that’s still used today! By then the 2 installed fruit machines proved very lucrative, and enabled The Club to extend and totally upgrade its facilities in the 60s. Today, happily, the club remains viable, mainly thanks to a surge in the number of private functions over recent years and a continuing number of new applications for membership being received.
Harry would certainly approve.